Rny gastric bypass is a type of obesity and Metabolic Surgery in which a small part of the stomach is formed in the form of a small pouch and this newly created pouch is directly attached to the small intestine. After Rny gastric bypass, the food eaten will pass directly from this small pocket of the stomach directly to the intestines, so that most of the stomach and the first parts of the small intestine will be bypassed. It is one of the most performed surgeries in the world and is one of the oldest known surgeries. Gastric bypass will allow you to achieve your health in cases where you cannot control weight with diet or exercise, or have serious health problems associated with weight. In laparoscopic operations, surgical instruments are passed through small incisions through trocars. Patients have a much smaller wound that allows for a faster recovery time than traditional surgery. These small wounds have a lower risk of infection and hernia formation. Laparoscopic surgery also protects the patient’s immune function. Rny gastric bypass In Turkey is performed in accordance with European standards and provides excellent results.

What is Rny gastric bypass?

It is one of the most commonly performed bariatric surgery operations in the world. Rny Gastric Bypass, known as gastric bypass surgery, is one of the most common bariatric surgery operations in the world. Laparoscopic (Closed System) Method, stomach is reduced by stapler method. In this way, reduction in nutrient absorption occurs. Appetite is greatly reduced. The stomach is cut from the bottom of the esophagus so that 30-50 cc of the stomach remains. In this way, the future of food is divided into a small stomach bag and a large unused stomach bag. Then the small intestines are cut from 40-60 CM and the lower end is attached to the small gastric pouch. The upper end from the large blind gastric bag, where bile and pancreatic secretion are present, is attached somewhere in the middle of the small intestine, which connects to the new small stomach.

How Rny gastric bypass is done? 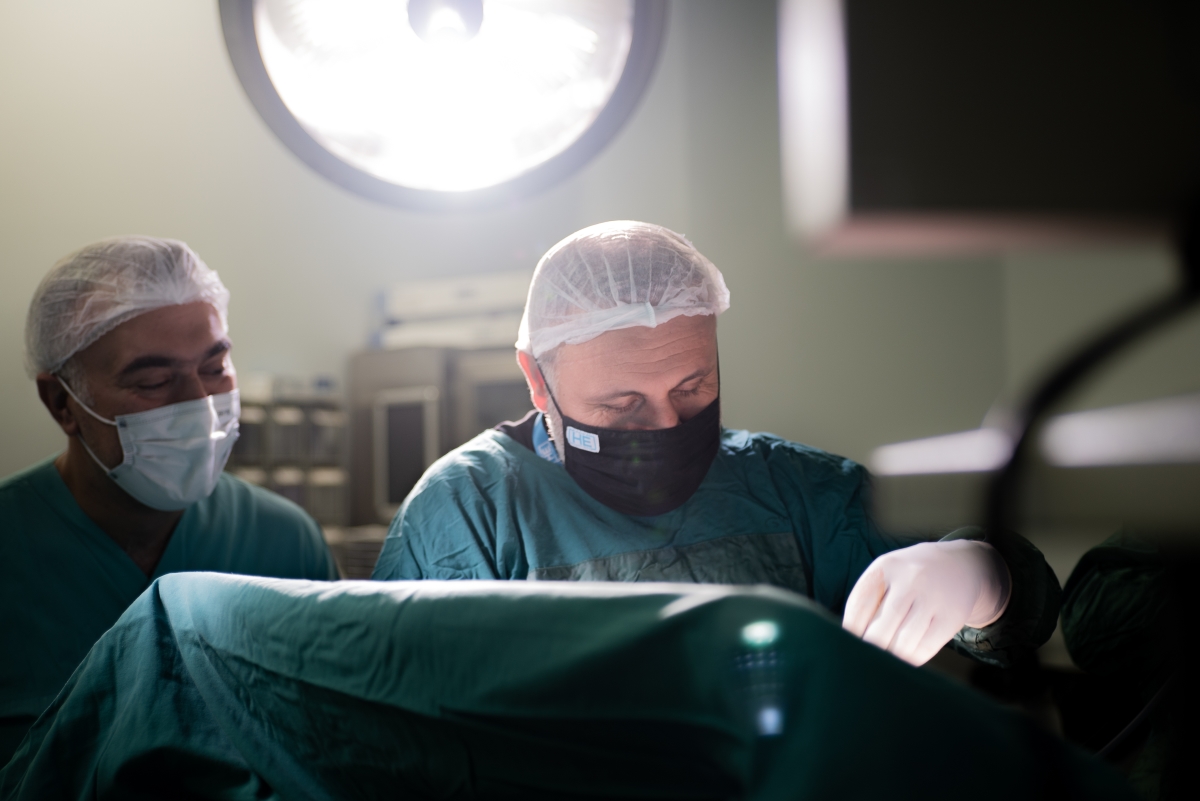 Dr. Hasan Erdem during the operation in Istanbul

Rny gastric bypass surgery is performed laparoscopically. In laparoscopy, from small incisions opened from the abdomen to the abdominal cavity, various instruments and a camera are placed in the abdomen for monitoring purposes. The image obtained by the camera is projected onto a screen, so the surgeon can perform the operation by watching it smoothly. The operation has 2 stages. In the first stage, a large part of the stomach is closed and cut and separated so that a little stomach is left in the part of the stomach that merges with the esophagus. In this way, a small gastric bag is created. The remaining stomach volume is approximately 30-50 ML. Unlike tube stomach surgery, no part of the stomach is removed in this operation. Thanks to the created stomach bag, nutrients now come here. In the second stage, a part of the small intestine is separated and connected to the stomach sac. In this way, a new digestive tract is created. During surgery, no parts of the body are removed. The separated parts of the stomach and intestines are attached to the created path after a place, helping bile and various enzymes participate in digestion. Since no parts of the body have been removed, it is possible that the digestive system can be restored to its former state. There is also a variation of the operation in which the intestines are directly joined with the stomach bag without dividing at all.

What are the advantages of Rny gastric bypass?

Here are some advantages of Rny gastric bypass:

What are the risks of Rny gastric bypass?

Here are the most common risks of Rny gastric bypass:

How is the recovery period after Rny gastric bypass?

Although the healing process after RNY gastric Bypass surgery is not a very fast process, it is a process that can be easily avoided if you follow the doctor’s recommendations. In addition, there are different recovery periods depending on the condition of open surgery or closed surgery. After Rny gastric Bypass surgery, nutrition is the most important issue. During your diet, you should increase the number of meals, but also reduce your portions. For the first 24 hours, you should definitely eat only liquid-focused. Then you can gradually and in small proportions switch to solid food. You should chew your solid foods thoroughly and swallow them. After surgery, you may experience mild pain. Your doctor will give you painkillers for this. After your pain is completely over, you should continue your routine checks regularly.

How much does RNY Gastric Bypass Cost in Turkey ?

When these prices are compared to other countries which such as the UK or the USA that offer the RNY gastric bypass surgery, it is easy to see the difference, which Turkey provides with its international experience and medical service, as well as surgery packages that include a variety of other services in addition to the procedure such as airport transfers, translation, and more.

Although it is known that one of the advantages of Gastric Bypass over other obesity surgeries is that it is also reversible, in practice it is very rare to perform it. Because this reversible surgery is an operation that has very high complication and risk rates and most surgeons cannot do, and most of them will not want to do. Although gastric bypass surgery is also said to be reversible, it is technically a difficult conversion surgery that not every surgeon can or wants to do with a very high risk and complication rate.